One of those crazy Australian Open thoughts... 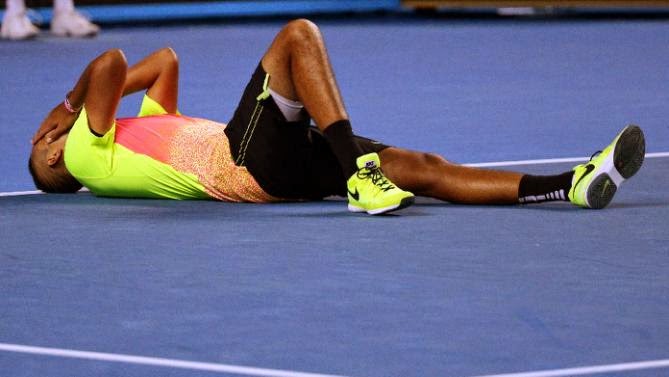 So, this seems a little odd for me, chiming in at this point of the year's first Grand Slam when I usually would've had my patented round of 16 predictions all said and done by now, with another post or two in between. But I just had this crazy, nutty, out-of-this-world thought:

Like, suppose Nick Kyrgios continues to play like the fearless teenager that he is and rides the momentum of hometown support, and shocks Andy Murray in the quarters? What if Tomas Berdych decides no one beats him 18 times in a row and takes it to Rafael Nadal in their final-eight matchup?

Roger Federer's already gone, having lost to Andreas Seppi in the third round. That just leaves the top dog himself, Novak Djokovic, who's been looking like the man to beat so far. He faces a resurgent Gilles Muller, then if he gets past that, big-boomer Milos Raonic or the underrated Feliciano Lopez in the quarters. Could one of them pull off the biggie?

I don't know when the last time all four of the four were entered in a tournament and not one of them made the semifinals. I'd probably have to guess the safe answer would be "never." But what if it happened now?

Crazier things in this world of ours have happened. And this would definitely be up there, tennis-wise.

To be clear, I'm not actually rooting for that to happen, but if it did, it would be mind-blowing.

And who doesn't like a little mind-blowing every now and then?