A stroke of brilliance with the U.S. Davis Cup lineup 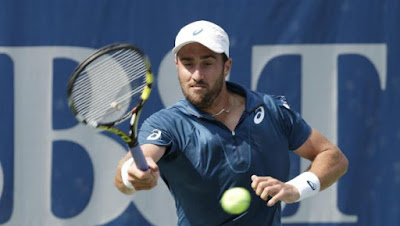 If you didn't know this about me, then let me fill you in on a personal fact:

I love Davis Cup, specifically the U.S. Davis Cup team. And there was an announcement this week that has me more excited about the squad then I've been in a minute—and for a playoff tie, no less!

Amid the Serena Slam-chasing, the Federer-romping, the Djokovic-winning and Flavia-winning/retiring and other happenings going on at the U.S. Open, the lineup for the U.S. in its playoff against Uzbekistan was announced. Making up the team will be Steve Johnson, Donald Young, Jack Sock and Sam Querrey.

Now why, you may ask, would this have me excited? Because I wholeheartedly feel that it's the best way to develop these young players.

I wrote something along those lines for Tennis View Magazine a couple of years ago. It's kind of the sink-or-swim theory: Throw the youngsters into pressure-packed situations and see how they handle it. Just imagine the confidence Sock or Young could gain from winning a live fifth rubber against a hostile away crowd. Or conversely, being able to soak in the praise of pulling off a feat like that at home.

Davis Cup Captain Jim Courier's counterpart, Fed Cup Captain Mary Joe Fernandez, has been going with the younger players for years—often because of the Williams' unavailability—and has had stellar results. I wrote something about that for Tennis View, too. (I guess I write a lot for TV!) A good draw with young talent and a bit of a veteran presence can do a lot of damage: i.e., Australia this year.

Anyway, I think the guy that broke the mold on in recent years of going with young talent was Courier's predecessor Patrick McEnroe. One of my all-time favorite coaching moves in sport is when he told Bob and Mike Bryan they had to win a Slam first before he put them on the team, forsaking an all-singles players lineup. They did, and the rest is history.

Now, not to say that John Isner and the Bryans should be kept off the team: All three have had amazing results over the years. But if there's a situation like this, let the neophytes play. And be sure to bring along Tommy Paul, Frances Tiafoe, Taylor May Fritz—any/all of those whipper-snappers—as practice partners.

A youth movement can only be a good thing.