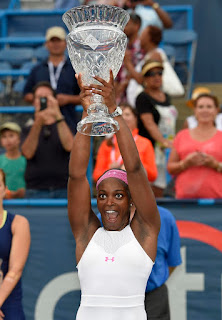 I have to admit, I had some serious doubts about Sloane Stephens getting that first final/title anytime in the near future. The past year had its ups and downs as far as results go with losses aplenty and coaching changes.

But any kinds of doubts were erased this week in Washington as the young American won her first career title (in her first career final). She beat Sam Stosur in the semis, then turned around and tagged Anastasia Pavlyuchenkova. In the last three sets played between those two matches, Stephens dropped only three games.

That's some serious ballin' right there.

(A side note: That's about how many games I've won in my last three sets. I'm really in a bad funk, right now.)

Extremely well done by Sephens. Here's hoping she can keep it up and live up to her potential.