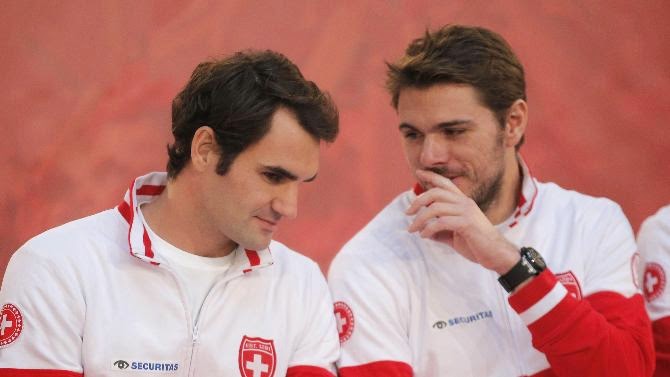 It wasn’t so long ago that Roger Federer and Stan Wawrinka—two of the top four players in the world—lost a Davis Cup tie that they were overwhelming favorites to win.

Against the United States.

The Swiss team has managed to bounce back against that most ignominious defeat quite nicely and finds itself in the Davis Cup finals for only the second time in the nation’s history. And even though Federer and Wawrinka have had fantastic years, they’re faced with some serious obstacles:

On the road against a veteran French team.

And the unbelievable amount of pressure to capitalize on their best opportunity to win the Davis Cup and put one last feather in the cap of Federer’s accomplishments.

It’s a stern test, possibly the biggest of both of their careers—even that of the most prolific Grand Slam winner in men’s singles.

Because of his near-decade of dominance, Federer has rarely found himself in a situation where he’s been so close to capturing a meaningful title and the situation representing his best opportunity to achieving the feat. In one instance, after Rafael Nadal lost early at the 2009 French Open, Federer became the overwhelming favorite to win the title, which he did, finally completing his career Grand Slam.

Conversely, at the 2012 Summer Olympics, Federer made it to the Gold Medal match, but was soundly defeated by Andy Murray, whom he’d just beaten on that same court a few weeks earlier in the finals of Wimbledon. More than likely, it was Federer’s best chance to join the likes of Nadal and Andre Agassi as holders of the career “Golden Slam.”

As for Wawrinka, his career has been one of mostly ups and downs. In 2014,  though, coming off his first year-end top 10 finish, he finally realized his potential and won his first Grand Slam singles crown, defeating Novak Djokovic and Nadal en route to the Australian Open title. The months afterward showed he wasn’t ready to quite capitalize on that surprise victory as he won only one more tournament over the course of the year.

Wawrinka has been a Davis Cup stalwart for Switzerland, often having to pick up the slack when Federer hasn’t participated in the competition over the years. But the situation this weekend is entirely different as the Swiss players will be facing former top-tenners in Jo-Wilfried Tsonga and Gael Monfils, who both know how to work a crowd to their advantage.

It’s a difficult situation, especially as Federer and Wawrinka are the favorites on paper and are both accomplished clay-courters. Can they overcome one of the stiffest tests they’ve had to face in their careers?

One thing’s for certain: It’ll be worthwhile viewing to see how they handle the pressure.

So, what have I missed?

Only a couple Slams, some Masters 1000 events, a year-end championship, a Fed Cup title, a Davis Cup round or two...
You get the idea!
But let's let all that go and talk about the here and now, now being the ATP World Tour Finals. Not much drama on the singles side with a lot of whuppings going on. Should be some good semifinal matches, though. Kei Nishikori is a gamer, Novak Djokovic is on fire, Roger Federer is playing like it's the late aughts and Stan Wawrinka has been solid. It's a solid efinal four, and one I'll ruminate on post-matchups.
And I promise it'll be sooner than my last post!