Miami will always be the "Fifth Slam" to me 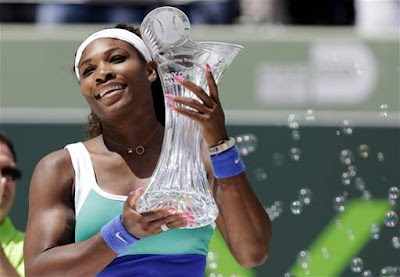 Those were some interesting finals over the weekend, huh?

Andy Murray knocked off David Ferrer today to win his second career Sony Tennis Open and Serena Williams added to her Miami haul with her sixth title there, rallying to knock off Maria Sharapova.

Three of those four are future Hall of Famers, while Ferrer has been one of the most consistent performers in the men's game over the past few years. In other words, the finals featured some marquee names--as it has throughout the tournament's history.

Why, though, did this year feel so different?

I don't know if it was the fact Roger Federer and Rafael Nadal were absent or what, but it seemed like there was a little less prestige attached to the tournament. Maybe it was coming off the heels of Indian Wells, which has been referred to as the "Fifth Slam" of late.

But whoa, when did that happen?

Indian Wells has always been a nice event as the first Masters 1000 tournament of the year. But since it's kicked up the prize money, revamped the facility and become a coed tournament, Indian Wells has become a highlight on the calendar.

I'm old school enough to remember the "Lipton" being the top non-Slam for both the men and women, and Indian Wells, nice though it was, being considered a warm-up for Miami.

Now, though, players are skipping it for whatever reason where once that never would've been the case. And Indian Wells has completely won over the players--particularly when it comes to comparing the venues.

But I hope Miami can turn the tide on where it stands, or at least find itself on equal footing again.

There's too much history behind the tournament.