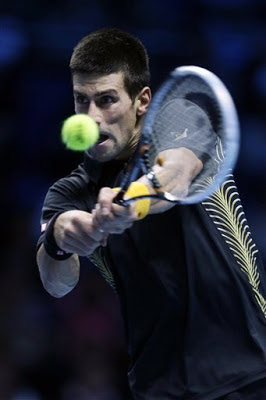 Truth be told, I thought Andy Murray's dream season would've continued with a finals trip, but I guess one thing in this tennis world of ours holds true:

Never doubt what Roger Federer can do!

Now, he and Novak Djokovic are a few hours away from battling in the title match at the World Tour Finals. Not to be too cliche, but I think this is as big a tossup as it gets. Federer's win over Murray was a very nice one, particularly after he just fell to Juan Martin del Potro in round-robin play.

Speaking of del Potro, he fell to the hammer that is Djokovic in a tight battle. But if there's one thing Djoko knows how to do it's gut out a win.

All that being said, I'm not sure who to pick to win it all. (Wait, what's that? Show some guts, you say. and make a pick? Got it!)

OK, I'll pick Djokovic. I think despite Fed playing very solidly up to this point, the world  number one might just have a little bit too much everything for Federer. There's not a ton riding on this match, just the fact that it's always better to win the last match of the year rather than be that other guy.

It should be an interesting one.