The summer of Serena? 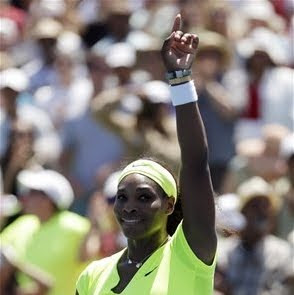 Truth be told, I hate posting posts where I lead off with being out of commission for a bit, but I feel it's something I shouldn't ignore. I just started a new freelance gig and it's doing work I've never done before, so it's been an adjustment period. I'm going to do my best to get back here as frequently as possible the next few weeks. I'm even typing this right now as I'm on a mini-vacation to Disney World. Talk about dedication!

Anyway, it seems like things are pretty much in order on the ATP and WTA Tours—If this was 2005 or something! Roger Federer's on top and it looks like Serena Williams is close to getting there. She just followed up her stunning Wimbledon win with victory at the Bank of the West tournament, beating Coco Vandeweghe in the finals.

This could be a very interesting summer for Serena with a Grand Slam and nice-sized tournament win already. Then next week the Olympics are starting. The U.S. Open'll be right around the corner, too. Provided she's healthy, she could conceivably win out over the next few months—and I honestly mean that.

There'll, of course, be great challenges on the way in the form of a Maria Sharapova or Agnieszka Radwanska or Victoria Azarenka. But a motivated and healthy Serena is a dangerous one. Stay tuned for how it all plays out! (And by "stay tuned," I'm referring to here at TTA?! I'll be back again—promise!)

Roddick vs. Djokovic: Second-Round Olympics action. Who ya got?