Sharapova, Kvitova, Stosur and Errani: Worthy semifinalists all around 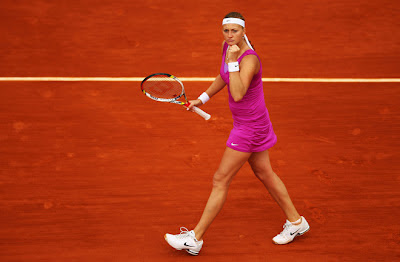 The semifinal field is complete on the women's side, with Maria Sharapova and Petra Kvitova defeating Kaia Kanepi and Yaraslava Shvedova, respectively, today. Samantha Stosur and Sara Errani booked their spots yesterday.

For all the talk about the upsets at the tournament, like Agnieszka Radwanska, Victoria Azarenka and Serena Williams all losing early, you can't really find any fault with the final four lineup as it now stands. You have three Grand Slam champs and one who's on the verge of breaking out at any moment. Any kind of finals scenario you could think of would be good. Errani versus Kvitova or Sharapova would be such a contrast of styles, while Stosur taking on either of those two would be a heavyweight battle.

I think it's very hard to pick a player more likely to win the whole thing among the four, and that includes Errani. I thought she would've gotten blasted out of the tournament by one of the heavier hitters she faced early on, like Ana Ivanovic, Svetlana Kuznetsova or Angelique Kerber, but she's held tough.

I'm going to stick with my Sharapova call I made pre-tournament, though: No turning back now! The semifinals, though, is where it's at and this round here has the potential to be as good as any recent Slam.

I'd love to see a Stosur or an Errani win. Sharapova against Kanepi match was not pretty.

BTW: proving I'm not a robot is almost impossible

Tremendously educational many thanks, I reckon your trusty readers would definitely want even more writing like this carry on the excellent hard work.