Now, the pressure's OFF Roger Federer 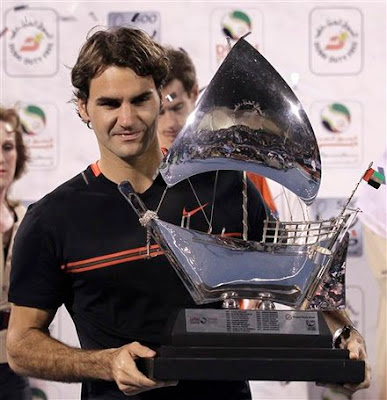 Amazing what a tournament win can do for a doubting blogger!

Roger Federer stepped up to the challenge I've been posing to him for months and won a decent title by knocking off one of his fellow members of the "Big 4" along the way, defeating Andy Murray in the finals. You may say, "Well, it was only Murray; not Djokovic or Nadal." Well, as we all know, Murray did just notch a solid win against Djokovic in the semis. So Federer beat the guy who beat the guy, and in pretty convincing fashion, too.

I know there's been a lot of "Federer's back" talk the past few months, but I refused to engage in any of it. Consider me a believer now, and I'll say this: If he doesn't win at least one of these big tournaments--Indian Wells or Miami--in the weeks ahead, I'll be extremely surprised.

Maybe that number-one ranking won't be too far behind, either. I hope that doesn't put too much pressure on the guy now, seeing that last sentence. But I guess he's proven he can handle whatever challenges I send his way!