It all starts for Novak Djokovic 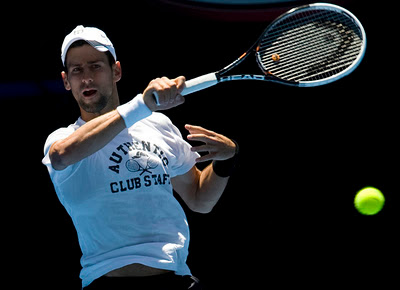 So the first day of the Australian Open has come and gone, and probably the match that was most on others' minds was the comeback by Bernard Tomic against Fernando Verdasco as the top seeds seemed to have it pretty easy. Nice win and effort by Tomic.

Now, day two is just a few hours away and we'll soon be seeing what world number-one Novak Djokovic has to offer. He's going up against Italian Paolo Lorenzi and should really have no trouble at all. It's a good way to ease into the tournament and see what can happen from there.

I'm sure no player ever actually thinks their draw is "good"; that's for the outsiders to speculate on--and that's what I'm going to do now! Djokovic's quarter really isn't that tough; he could realistically be on the court for three hours--over the course of his first two matches! I'm still not 100 percent sure where his game really is now as he says he's fine and he did win that exhibition tournament early on. I guess I'll start to get a better assessment as the tournament goes on.