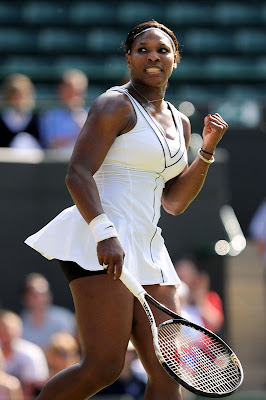 And on the seventh day, they rested...

It's the Sunday "off" day at the big W as players get ready to hit the home stretch of the game's marquee tournament with the round of 16 matches all set up. I have to say, I didn't get to catch much live action because I've been caught up with this new freelance gig (but I was following the scoring online as much as I could!) Here are some quick thoughts on the week that was:

* Welcome back Venus and Serena! (But Venus, that toga top is horrible.)
* Roger Federer and Andy Murray look good.
* I wasn't shocked at all by Vera Zvonareva and Andy Roddick losing early.
* Bethanie Mattek-Sands needs to worry more about her game than tennis ball-lined jackets.
* How about all the unseeded players in the 16s?

And the week that will be:
* Murray-Richard Gasquet, Mardy Fish-Tomas Berdych and Serena Williams-Marion Bartoli are some great fourth-round matchups.
* Don't sleep on Maria Sharapova, Venus, Juan Martin del Potro or Michael Llodra.
* The WTA has to be pleased with how the draw's shaken out so far with a healthy mix of veterans and newbies advancing.

I'll keep following online while I'm working! And if you want my thoughts on the doubles action at Wimbledon, check out that blog sensation that's sweeping the nation, The Doubles Alley. But don't forget to come back here, too! 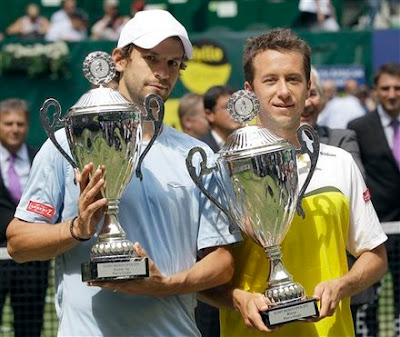 * Right before the French, victory in the World Team Cup.

* Two of them, Philipp Kohlschreiber and Philipp Petzschner, played in the final of "hometown" tournament in Halle, with Kohlschreiber taking the title.

In other words, it's starting to look like Germany's once again becoming a force on the ATP Tour. Of course, I'm not saying it's like the days of Boris Becker and Michael Stich, or even Tommy Haas and Nicolas Kiefer, because none of those guys currently ranked among the top 100 have seen the top 10. But watch out, though, because the increased depth will only inspire players to keep reaching higher to outshine their compatriots. There's nothing like a little homegrown inspiration/competition: Look at how Spain has benefited from that.

I don't know if any of the German guys really have Slam-winning potential, but I think it's good to see them making an impact on the tour.

So, now that that little thing called the French Open is out of the way...

Just kidding, it was quite the big thing, with history being made as Rafael Nadal took home his sixth title, equaling Bjorn Borg, and Li Na winning China's first Slam singles title on the women's side. And how about that Roger Federer?

Anyway, this is a big occasion here at Tennis Talk, Anyone?: This is the 500th post! (Yay! Yippee! Woohoo!) I started this blog four years ago (I know, that's a long time to write 500 posts) right around the grass-court season of 2007. As a matter of fact Amelie Mauresmo was playing Justine Henin in the finals of the Eastbourne tournament, as noted in my first post.

Whatever happened to those two? Man, it's been a long time! : )

My second post was about a doubles team, Eric Butorac and Jamie Murray, aka "Booty and Stretch," who I thought really brought some excitement to the doubles game.

And speaking of segues...

I also want to get into the big news I mentioned in my previous post: I'm adding a new blog to the Van-blogging-about-tennis stable, The Doubles Alley!

I'm actually going to be writing two blogs now: Good old TTA? (It's my baby: I could never stop writing this one!) and The Doubles Alley, which will focus on doubles—pro, amateur and otherwise. (I don't know what "otherwise" actually means...)

Anyway, it has its own URL and everything (http://thedoublesalley.com) or click on the link above, so catch me here, there and everywhere!

And mainly, thank you so, so, so much for reading this blog!