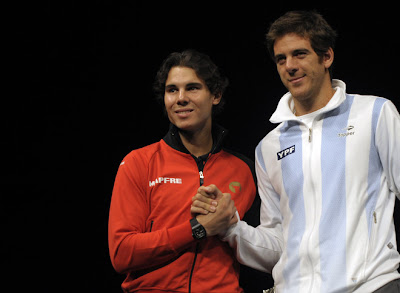 It's just a few hours until the first ball is struck in the Davis Cup final between Spain and Argentina. This could be a heavyweight battle. Or a whitewash for Spain. Or a display of epic proportions from Argentina to beat the odds.

In the first rubber, Rafael Nadal takes on Juan Monaco. Then Juan Martin del Potro goes up against David Ferrer. Realistically, you could be looking at a split heading into the weekend, which is a feat unto itself considering Spain's playing at home on clay.

The doubles could yield an interesting result: Fernando Verdasco and Feliciano Lopez have been a solid team for Spain, but you don't know what David Nalbandian has up his sleeve. Eduardo Schwank is a solid-enough player; nerves will be a factor for him.

On the last day, the blockbuster match--that is, if the tie's still live--of Nadal and del Potro is first up. Then, you have the possibility of Monaco and Ferrer playing for all the marbles, or reduced to a best of three.

It may seem like I'm a little all over the place with talking about this tie, but the circumstances here will do it to you! I'm just hoping for a good final.

Wait, I can't chicken out like that: It wouldn't be TTA? if there weren't some prediction.