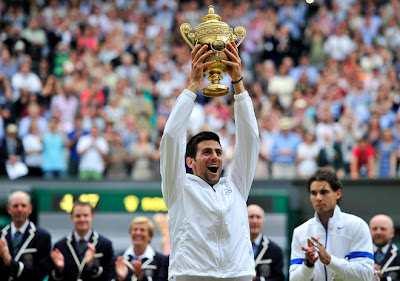 1995: Now that was a tennis season! Andre Agassi hit the top spot for the first time after winning the Australian and Pete Sampras took home the last two Majors of the year.

The French Open was won by Thomas Muster in his first and only Grand Slam final appearance. Muster was doing his impersonation of Agassi and Sampras by putting together a truly extraordinary season in winning 12 titles. Actually, that's Federer-like!

Along with the Slam, he won three Masters Series 1000 events (Monte Carlo, Rome and Essen). Not a bad year, to say the least.

The next year, though, was tricky: With the way the rankings system is set up, he had to defend all those points from the dream season or risk seeing his ranking plummet. Muster gave it the good fight: He defended six of them in 1996, plus added an extra title in Bogota. He was shocked relatively early on at the French Open by Michael Stich, but still had a pretty solid year. Seven titles is nothing to sneeze at!

Someone who found themselves in a similar situation was Roger Federer. From 2001 to 2004, the number of titles he won went up each year: one at the start to 11 in '04. In 2005, he won 11 again, with seven title defenses. Then in '06, he went one better and brought home 12 titles. He repeated his efforts from the prior year at six of those tour stops.

Now Novak Djokovic finds himself in a tough situation after his dream '11 season. Ten titles won, with three of them being Slams and five Masters Series 1000 events, will be exceptionally tough to defend next year. The mental and physical pressure could be too much. It'll be a true test of where he places in the history of the game: all-time great or really good player who had an amazing year.