Congratulations to Spain! (and I can admit when I'm wrong) 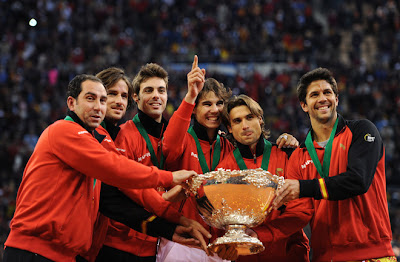 3-2 Argentina: perhaps I was a tad bit off with my prediction!

Spain once again won the game's top team tournament, this time over Argentina. In my last post, I mentioned how this final was pretty unpredictable, which ended up being the case:

* Who knew David Nalbandian and Eduardo Schwank had such stellar tennis in them?

* Who would have figured Rafa would be in a dogfight in his second singles rubber, considering how differently things went for him and del Potro the first day?

* Who didn't think David Ferrer had gas left in the tank from a long season to do what he did against del Potro?

Anyway, hard to predict, but entertaining, nonetheless. And Spain truly deserved to win it all: Congrats again!