WTF? (where TTA? gets in on the play on acronyms) 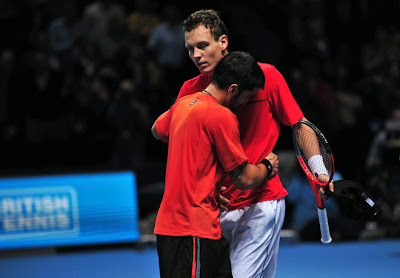 Novak Djokovic and David Ferrer should be expected to go to a third-set tiebreaker, right? If not, I'm sure the fans at the O2 Arena for the ATP World Tour Finals will be hollering for their money back!

It's only to be expected that a match should go the distance there after what's been happening, most recently with Tomas Berdych fighting off a match point against Janko Tipsarevic. Guess it's karma gone right for Berdych after what happened to him against Djokovic.

If Ferrer and Djokovic don't go to the end of ends, maybe it'll just be your standard-issue blowout, like that Roger Federer-Rafael Nadal result. Umm, yeah, that did not live up to the hype, to say the least!

Or who knows? Maybe Ferrer or Djokovic will even bow out of the tournament before the match starts, like Andy Murray was forced to--leading to the Tipsarevic appearance. You just never know.

I mean, WTF, WTF? (Look, I used it twice and it makes perfect sense!)