WTF Preview: Murray, Federer, Nadal and Djokovic--who has the answers? 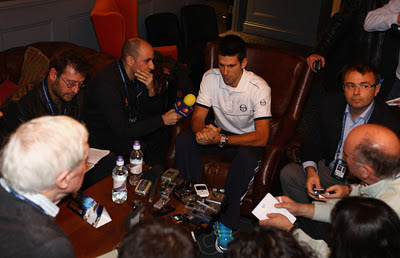 (We're hours away from the start of the ATP World Tour Finals, and here's the second half of my preview. Enjoy the first day!)


Looking at Novak Djokovic, Rafael Nadal, Roger Federer and Andy Murray heading into the WTF, one phrase springs to mind when it comes to the "Big 4":

How healthy is Djokovic? Is Rafa going to be rusty? Will the pressure be too much for Murray, playing in his "hometown"? Is Federer really in good form?

And that's only a sample of what I'm thinking about those guys going in! I guess I can give my take on those four queries.

Djoko isn't healthy. Rafa will be rusty, but a little rested, which will do him some good. If there's a time for Murray to thrive, this is it. Federer's form is still too hard to gauge, seeing as how he didn't play any of the guys ranked above him.

Federer could be in for a bit of a shock, going up against Nadal in group play for the first time, and Jo-Wilfried Tsonga and Mardy Fish are no jokes. The other group holds its own problems for Murray and Djokovic, as alluded to in the prior post.

Still, I think the champ of the tournament will come out of the top four, maintaining what has been the status quo all year--despite all the questions.