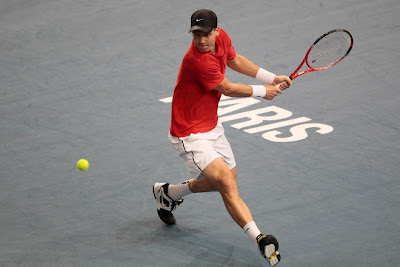 (I knew I'd fall behind from my original intentions! All that matters is I'm here now, so let me give you something on the guys outside the top four.)

So there's Roger Federer, Andy Murray, Rafael Nadal and Novak Djokovic, for whom playing in the ATP World Tour Finals is almost a given.

Then you have players like Mardy Fish, who is making his debut; Jo-Wilfried Tsonga, who's been on a tear the past couple of months; Tomas Berdych, seeming to turn up the intensity the past few weeks; and David Ferrer, who you know will fight for everything he gets on a tennis court, regardless of the surface.

Those four have a lot to play for, in particular, a confidence boost for the year ahead and points that will help them break up the stranglehold at the top.

Fish, Tsonga, Berdych and Ferrer are all quite adept at playing under fast conditions, which will help them greatly in London. Ferrer and Berdych are in the same group with Djokovic and Murray, while Tsonga and Fish will have to take on Nadal and Federer, as well as each other.

So who of the lower four can do the most damage?

I'm going to have to say the draw actually shakes out nicest for Berdych: He just beat Murray, Djokovic is perhaps more vulnerable than he has been all season and Ferrer might have trouble handling the big man's firepower. Look for Berdych in the semis.

Hate to discount Andy, esp. In UK. But Tomas does have what it takes and I'm in agreement with ya. Still got Nole Rafa final. Can't imagine it any other way.

Hi Taf, sorry I'm just now replying! It was a good tournament all around, despite the questionable form of some of the players. Can't wait till next season!