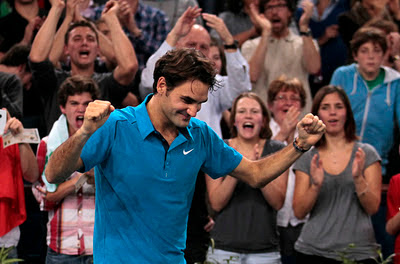 Well, he finally got one there!

Roger Federer won his first Paris Indoors title, beating Jo-Wilfried Tsonga in straights for the victory. It's been a little shocking that, for whatever reason, he hadn't gotten it done there before as he's one of the greatest fast-court players of all time. Now that monkey has been erased with his 18th Masters series title. This was also his second tournament victory in a row after having won in Basel.

I said a few days ago that I thought he was the hands-down favorite for this event and he lived up to that. (Well, not my personal proclamation; I'm going to go out on a limb and say TTA? isn't on his radar.)

I'd expect this run of good form will continue through next week's World Championships. However, I'm not going to declare Federer's "back": It's just too hard to say as he still hasn't faced his three main rivals recently. And then when he does, you have to wonder about the state of their health, mental and physical.

Fed's proven he's OK in both of those regards at the moment: Back-to-back titles will do that.