Novak Djokovic's shoulder is a burden 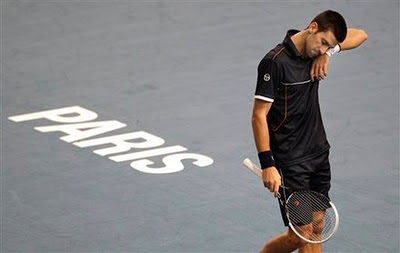 So Novak Djokovic pulled out of his quarterfinal match with Jo-Wilfried Tsonga at the Paris Indoors.

If you didn't see that coming, you might need some thicker glasses!

Seriously, though, it was so borderline that he was even going to play the tournament, I'm surprised he even got a couple of matches in. I'm not going to go into why he chose to enter the event, but I will say that I think he should've just sat it out. The dude is seriously beat up at this point in the year: legs, back, shoulder ... that's a lot for one guy to deal with over 11 months.

Who knows? Maybe he shouldn't have played in Basel. I do know that looking at it now, it seems he came back too soon. Sure, it's good to get matches in before the year-end championships, but with the season Djokovic has had, that tournament almost gains a sense of irrelevancy compared to being as healthy as possible for 2012.

Anyway, just a bit of advice from TTA?, Novak, old pal: Take it easy out there!

He had to play Paris Masters because of the sponsors and income. He would lose 1.6M$ if he didn't play. Hope he'll recover for London.