Federer should look all right by the end of '11 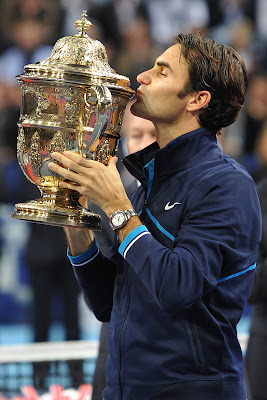 I'll say this right now: If Roger Federer doesn't win the Paris Indoors this week, well I just don't know what to say! That goes for the year-end championships, too.

He's coming off his second title of the year with his win at the Swiss Indoors over the weekend, so it seems he's in pretty solid form, right? Well, I think the tournament was marked more by the loss of Andy Murray before his first match, and Kei Nishikori upsetting Novak Djokovic in the semifinals. Federer did beat the guy that beat the guy in the title match, but still, how much more impressive would his win have been if he had topped Djokovic in the finals?

It's not Federer's fault that the draw ended up the way it did, though. He took care of business on his part (a win over a fellow top-four player probably would have been more legit, though.

That being said, he has to be the hands-down, clear-cut favorite to win this week in Paris. So, so many of the top guys are battling injuries, while his time away getting healthy seems to have helped. And things should be fairly interesting by the time the YEC rolls around: He should go into that as the favorite, too.

By the time the year ends, Federer could be in great shape, rankings- and confidence-wise. We'll see how it all shakes out in the weeks ahead!