David Ferrer: How does he do it? 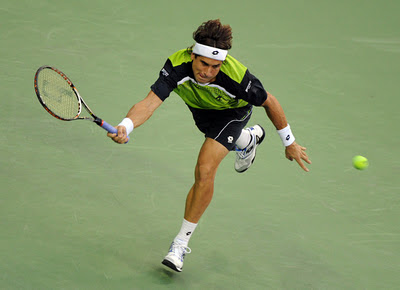 OK, so right now on the ATP World Tour, you have your "Big 4" of Novak Djokovic, Rafael Nadal, Andy Murray and Roger Federer firmly locked in at the top. Then, toward the lower tier of the top 10, you have big guys like Tomas Berdych, Jo-Wilfried Tsonga and Mardy Fish lurking around.

But in between those two groups happens to be the defending champ at this week's tournament in Valencia, David Ferrer, who, rankings-wise right now, can't catch the top four. In that similar regard, the guys behind him have no way of touching him at this point, even though they play with a style you might think upon first glance could overpower the Spaniard.

Those guys might be able to tag Ferrer every now and then, but for the most part, he's going to come out on top. While he may play a steadier brand of tennis, he's capable of using his physical abilities to put some pop on the ball when the time is needed. You don't get to a career-high ranking of four in the world just by getting every ball back, especially in this day and age.

If Ferrer defends his title in Valencia this week, it wouldn't come as a surprise. If he were to make the finals next week in Paris or later at the year-end championships, that would be a bit of a shock. Then again, he has made the finals at the YEC before, so maybe it is well within the realm of possibility.

I don't know: I started this post with a question in the headline, and I'm still confused at the end! All I guess I do know, is that he's an enjoyable player to watch and best of luck to him going forward!