Will the titles start rolling in for Janko Tipsarevic? 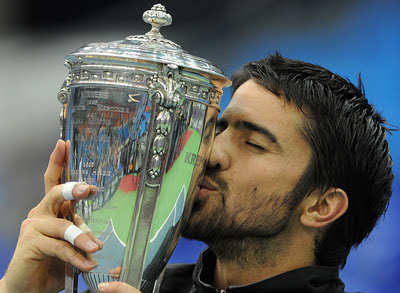 Yep, he did it again: Janko Tipsarevic won his second title of the year over the weekend, this time at the Kremlin Cup in Moscow, beating countryman Viktor Troicki in the finals. This follows up his first victory at the event in Kuala Lumpur a few weeks ago. And that comes off his quarterfinal run at the U.S. Open, the year's last Major.

Not a bad stretch by someone who probably frustrated himself and his fans for years!

He's always been a talented player with big wins under his belt, but for whatever reason--lack of focus, injuries--could never sustain momentum: something I just wrote about a few weeks ago.

Now, seeing his countryman Novak Djokovic reach the heights he has has inspired Tipsarevic.

And that could be a scary thought for the other players on the ATP Tour. Tipsy is playing with an extremely high level of confidence right now. If this carries over into '12, I could see him becoming entrenched in the top 10 for a couple of years at least.

Not a bad stretch indeed.