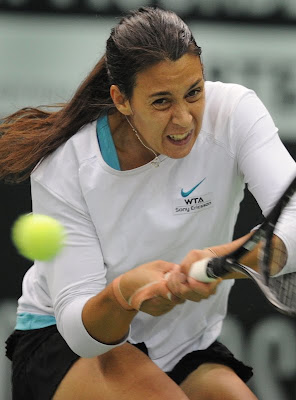 Agnieszka Radwanska, the hottest player on the WTA Tour the past few weeks, lost her match to Lucie Safarova at the Kremlin Cup in Moscow. This has opened the door for Marion Bartoli to get the last qualification spot at the year-end championships. All she has to do is win the tournament.

No pressure at all!

Bartoli is playing well, though, having just won the tournament in Osaka. However, I've never thought of her as the type to rattle off eight to 10 wins in a row over the course of back-to-back tournaments. Truth be told, I've probably thought of her as the opposite: someone who could win a Premier-level event one week, then lose to a qualifier the following.

It's good to read in Bartoli's press, though, that she is focusing on getting that final spot. She pretty much is already going: Either her or Radwanska will serve as one of the alternates there.

But if you have to keep on traveling, might as well make sure you're in the field!