In a race-to-the-finals kind of mood 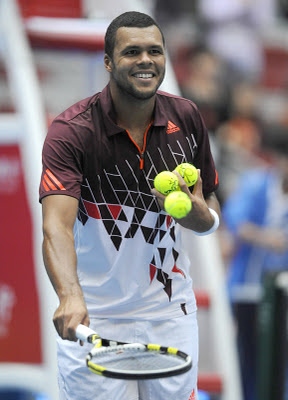 It's not that I want to see the '11 season end: Let them play year-round, I always say! (Don't let Rafael Nadal or Roger Federer see that...)

For some reason, I'm really into following who's going to make it into the ATP and WTA year-end championship events. It's great that you have players such as Li Na qualifying for the first time. It's also exciting to see hopefuls like Mardy Fish and Andrea Petkovic so close to joining Li.

Then you have players like Jo-Wilfried Tsonga and David Ferrer, who have been there before but haven't made it a habit like Andy Murray or Novak Djokovic.

Speaking of Djokovic, how amazing would that be if he capped off this insane season with a win in London? That's the perfect way to bookend a year: Federer did it last year after starting the season with a win at the Australian Open.

Nadal couldn't pull it off the year prior, but he has to be motivated to take the '11 year-end championship, particularly as it's the only major title he's missing.

If you were to switch back over to the women's side for a minute, world number-one Caroline Wozniacki didn't capture a Grand Slam title but beating her peers that did would be a nice way to go into 2012.

And how about the old standbys that just won't be there? A shout-out to the Andy Roddicks and Serena Williamses (well, not that she played the YEC much anyway) of the world.

There's plenty of excitement and intrigue wrapped up in "the race"--enough to get me caught up in it weeks before the end!

I agree with you. This time of year is not the "silly season" as a tennis columnist put it. I find it fun to watch the race for the Tour Finals. Players seem to really care no matter how long it makes their season. They want to be among those final eight players. It is fun to count the points and figure out the possibilities just as the wild last day of the baseball season. The Tour finals also make the players fight with will and strong mental toughness. The season has been long and here they are fighting for big points and big money and bragging rights. Besides two other times, Fed won the Tour Finals the three years he won three majors and at least 11 titles (11,11,12). So it would be interesting if Djokovic could win (he has already won it once). Last year was the first time Rafa made it to the final so it will be interesting what will happen this time.