Andy Murray and the race for number 3 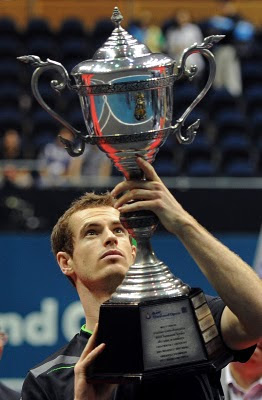 Well, I guess he's gotten his quest off to a good start!

Andy Murray won the PTT Thailand Open over first-time ATP finalist Donald Young yesterday. During the tournament, Murray stated his intentions to finish the year in the three-spot, ahead of Roger Federer. Andy's going to have to win a lot of matches to pull that off, but it'll be a tall task: After all, he is going after Roger Federer!

But you know what? Good for him for setting that goal, and if he pulls it off, more power to him.

I'm a firm believer that there is a "Big 4" in men's tennis, despite Murray not having won a Slam. He's in a position to do so at every Major, even the French, as he's shown the past couple of years. The guys ahead of Murray are legends, but instead of accepting the fact that he's playing in a tough era as it seems a lot of players are doing right now, he's doing all he can to keep up--and has notched more than a decent number of wins against Novak Djokovic, Rafael Nadal and Federer.

I also find it refreshing to hear a player making a bold challenge: It puts pressure on themselves, and if they pull it off, it makes the reward that much sweeter.

And look, wouldn't you love to hear David Ferrer, Robin Soderling or Tomas Berdych say "I'm going to break up that stranglehold on top of the rankings and stay there"?

There is a stranglehold up there, and kudos to anyone looking to improve their standing in it.

I agree with you generally about Andy but have a problem with his shorter season wish. Here he is playing 3 tournaments in a row (Bangkok, Tokyo, Shanghai) and then Paris Indoors and London. Yet he wants the year to end earlier. He is doing this to improve his ranking but if they shorten the year too much and some of other tournaments are affected then other people may not be able to improve their rankings. There are plenty of players who want to play "every week" to stay in the top 100, 50 , 30 etc. It means more money for them and chances for them to automatically get into tournaments esp the majors. So although some say the top players "carry" the tour, you still wouldn't have a tour if the top players didn't have people to play in the lower rounds. So these players need to make sure whatever the top wants that it does not do them harm in their careers.

He's inching towards the No.3 spot and he might get there by the end of the year, but all said and done, it's the grand slams one wins that counts.

I believe his time will come soon. He's been in a few grand slam finals now and has consistently been in the top four for quite some time now and if there's such a thing as justice or fairness, then Murray is worthy of it. If not very soon, he should win one by the end of his career.