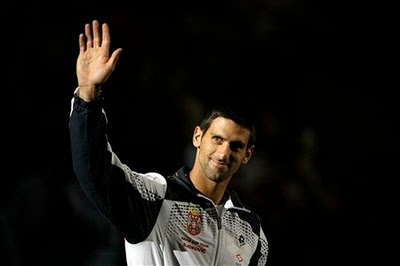 Just like that, in one fell swoop, my two favorite things about pro tennis are all wrapped up in the confines of one week: the U.S. Open and the Davis Cup. And just like he has all season, Novak Djokovic in some ways had and is having a tremendous impact on both.

First, let's take a look back at his amazing U.S. Open run. What else can you say about what he's done this year? Kudos to him on a third Major championship in '11.If he's on the court, he's winning.

Speaking of him, though, being on the court...

His lack of being on it this weekend has his country in a deep hole in the Davis Cup semifinals this weekend. If anyone out there, though, deserves to take some time off it's Djokovic. His teammates should've been at least able to earn a split in the opening singles. But I guess that's why pro tennis is so unpredictable: You don't know what's going to happen when it's time to serve them up.

That is, unless you're Novak Djokovic, who on or off the court has a lot of control over how things are going to go down.