Is this Roger Federer's Sampras-in-'02 moment? 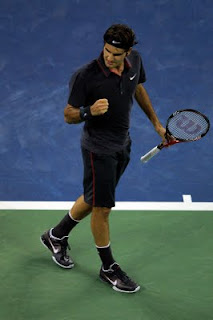 As Novak Djokovic and Roger Federer get ready to take the court today (or take it, then come off, then go back again--it looks like it's going to be one of those days), I was thinking something about Federer there:

Mainly, it's been a long time since he's won any tournament, much less a Grand Slam singles title.

Of course, it really hasn't been that long: He did win a regular title in the first half of the year and he did capture the Australian Open last year for a Major win. But you can equate that amount of time for Federer to dog years. Who would've ever thought he'd enter any kind of title-winning drought?

That being said, I wonder if this year's U.S. Open will be his time to show that he's still a Slam winner, much like Pete Sampras did at the Open in '02. Federer's been playing particularly well the whole tournament and we all know what happened at this year's French Open when he faced the then-unbeatable Novak Djokovic in the semifinals.

By no means do I think he's going to retire if he wins; he still has years left in him at the top. I just wonder if this is his time to come in and win a Major when everyone's counting him out, which was the case with Pete in 2002. I guess we'll find out soon enough!