Is it Janko Tipsarevic's time? 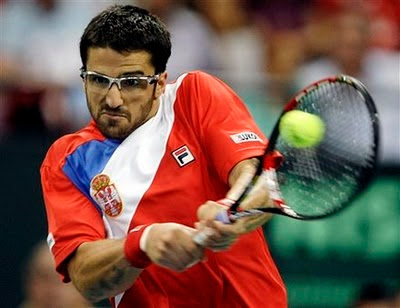 A solid top-20 ranking, first Grand Slam quarterfinal, a couple of runner-up appearances at Tour events: This has been quite the season for Janko Tipsarevic.

Now the question is can he grab that elusive first career title?

Tipsarevic is the number-three seed at this week's Malaysian Open, held in Kuala Lumpur. The top seed is Nicolas Almagro and number two is Tipsarevic's countryman Viktor Troicki, who has already been in the winner's circle once in his career.

Tipsarevic and Troicki, for all their success, are still looking up to Serbian superstar Novak Djokovic. Tipsarevic has been open about how much of an influence Djokovic has had in his desire to get better and reach a spot in the rankings that is reflective of his talent.

He's always had the talent as a smooth shotmaker that can succeed on any surface, and before he hit the spot in the rankings he rests at now, he was one of the guys in the draw that no one wanted to face early on. Tipsarevic finds himself one of the hunted now, but there's a bit of irony there as he's still searching for that first-place trophy to solidify that he's on the right track. The Malaysian Open is the latest place for that opportunity to come about. The good thing is that he's worked himself into a better spot to make that dream a reality.