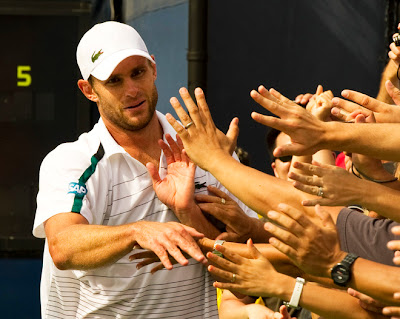 Going four against Michael Russell must seem like a lifetime ago!

Court-gate, bubble-gate, Armstrong-gate--whatever you want to call it--aside, Andy Roddick played a very solid match against David Ferrer today, and on Court 13 no less! This might be some of the best he's played all year, and now he has to try to pull another trick out of his hat tomorrow against another Spaniard, or rather THE Spaniard, Rafael Nadal.

Call me crazy, but I think he has a shot against Rafa. I've been saying this for a minute now that if he played like he did in their matchup in Miami last year on a semi-regular basis, his ranking might be in better shape. That style of rushing and crushing might be what serves him best here. Nadal, however, is no dummy and will be on the lookout for it.

Maybe Roddick will get all fired up about some issue with Ashe and ask to go back to the friendly confines of 13 again!