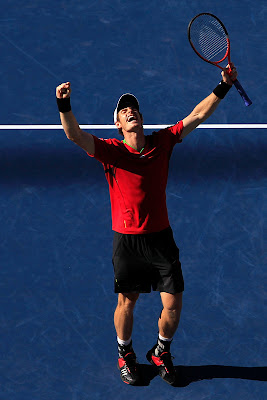 I alluded to this on Twitter earlier, but I think any talk of Andy Murray not being part of the "Big 4" any more should stop immediately. I mean, what else does the guy have to do?

That aside, he showed just like the other guys ahead of him in the rankings, he's capable of dealing with whatever a player below him in the standings throws at him. John Isner was game and made a fight out of it, but at the end, Murray was just too good. Isner might have thought he had good preparation to combat Murray by going against Gilles Simon the round before, but Simon is "Murray-Lite."

Much like David Ferrer is "Nadal-Lite." Andy Roddick from the first ball on was on his heels. Come into the net? Get passed. Hang at the baseline? Watch groundstroke winners fly by. It was just too much for him today.

Now you have your dream semifinal lineup at the U.S. Open: Roger Federer vs. Novak Djokovic and Rafa vs. Murray. TTA? is picking a Djoko-Murray final, but anyone of them deserves to be there, just like Murray deserves his spot in the "Big 4."