Agnieszka Radwanska aims for two in '11 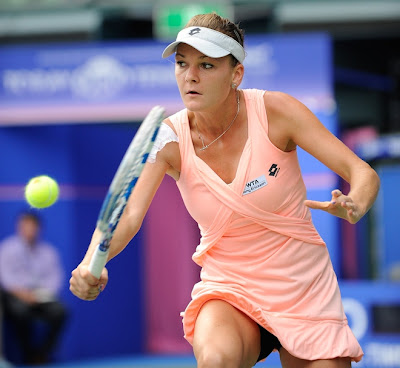 The finals are set at the Toray Pan Pacific Open, with Agnieszka Radwanska beating Victoria Azarenka and Vera Zvonareva getting by Petra Kvitova.

It's going to be the second time these two have played in a final this year, with Radwanska beating Zvonareva in Carlsbad, Calif., over the summer. That was Radwanska's first title in what must've seemed like a decade, but in actuality was since 2008.

Ahhh, 2008: Radwanska won three titles that year and made her top 10 debut. It seemed like she was destined for Grand Slam greatness at some point over the next couple of years, but it didn't happen as some of those players in the top 5 were just too tough for her--and a lot of other women--and injuries got in the way, too.

However, that win over Azarenka and the results she's put up this year shows she's close to hitting her peak and a win in Tokyo could do a lot to get her there.

I was displeased by Kvitova's implosion. Just seemed too weird. She hadn't lost serve all tournament and then she loses serve and goes to pieces. Azarenka also was inconsistent in her play-will she ever make her mark on a major?
Re Radwanska v Zvonareva: It was difficult to see Zvonareva's level given Kvitova's play. But Vera got some good shots in the game and didn't let her 1-5 score get her down. She also hasn't lost a set all tournament. Radwanska played well and just hung around during those long rallies-kept pressing at Vika. So who will win? They both tough matches out so...

I watched Radwanska for the first time ever when she played Azarenka and she is now one of my favourite players. She is very interesting to watch. One of a few players with a varied game.
I am surprised that she has not won more tournaments.
As for Kvitova, her performance doesn't really remind that she is a slam winner. In fact, the top four in womens tennis are now players without a slam which only shows that Grand Slams are not the only measure of how good a player is. Being consistent is what really shows that.

Hi all. It was a great win for Radwanska, and I think if she stays healthy she could have a good '12. I saw her at this year's U.S. Open and she was covered in kinesio tape, so that might be a tall order!

To Marine
The top 4 women do have a person that has earned 3 majors (grand slams)-Sharapova.