Does Roger Federer need to win the Rogers Cup? 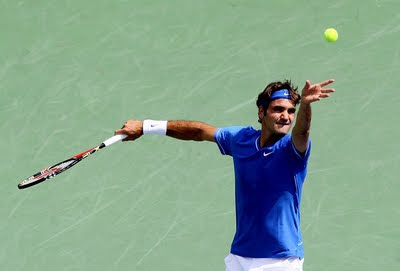 Waaay back when, I wrote something for GOTOTENNIS, one of THE top tennis blogs out there, on whether or not Roger Federer needed to win the 2011 Indian Wells event as part of the Serves & Returns feature (I haven't forgotten about S&R, Team Freaky: I'll be back soon!). I brought up at the time with the way the guys around him in the rankings had been playing that he'd be hard-pressed to pick up a title for a while.

Looking at what's happened the past couple of days at the first Masters tournament of the summer hard-court swing, I couldn't help but think of that again. With Rafael Nadal and Andy Murray out of the way, does this become his best chance to win a title for the next few months?

I realize that, of course, he is Roger Federer and you can never, ever, ever count him out at any event. But if Novak Djokovic stays playing the way that he is, and Rafa and Murray get in a nice groove, title winning becomes a tough task going forward. It's crazy to think that Fed's only captured one tournament so far this year. If he wants to put an end to that and get back on the board, the Rogers Cup might be the best place to do it with two major hurdles falling already.

At the beginning of the week I'd have probably settled for a good showing. But with Rafa and Murray out - you're right, be a shame not to capitalise.

Federer loses and most probably Tsonga will come next as Person Suspected of being a drug user.

I think that how it is with the great Federer. He wins and he is magnificent. He loses because his opponents cheated. How cruel can that be to Federer.

Until such time that Federer realizes and accepts that his game needs some changes, it won't be long before losing becomes a painful habit.

I really think Federer needs to win the US Open. 1000 events aren't a must. I'd like to think he maybe saving somethign in the tank for those. Who knows.

How does one become a contributor to gototennis? I blog at www.peRFect-tennis.co.uk - I'd be interested in writing...