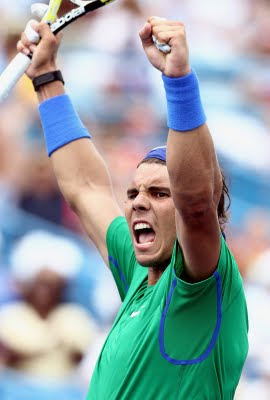 Aww man, David Ferrer: Why couldn't you come through?

Not that I have anything against Gilles Simon; it just would've been cool to see the top eight seeds all make it through to the quarters at the ATP Masters 1000 stop in Cincinnati. Simon's a worthy addition to the quarterfinal lineup, so I won't be too mad!

But thinking about the (almost) Elite 8 there, I'm going to make a quick call on who I think will be in the Final Four:

And would you look at that? A fabulous Final 4!

UPDATE: Obviously, I was a little off! Congrats to Fish and Berdych on big wins, and an extra congrats to the champs, Murray and Maria Sharapova on the women's side!