Mardy Fish and the big picture 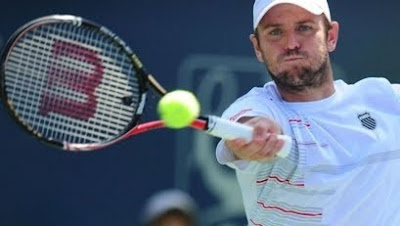 Chalk this up to some weird paranoia of mine, but I always get nervous seeing players on hot streaks leading up to Majors. Maybe it's from the shock of what happened to Andre Agassi in 1995, when he was unbeatable that summer until Pete Sampras stopped him in the finals of the U.S. Open.

Or it could be tracked back even earlier to 1989 when Brad Gilbert went into the Open a solid favorite, but a stomach virus and a game Todd Witsken tagged him in the first round.

Anyway, one of my favorites, Mardy Fish, is on fire right now, reaching his second final in a row, this time in L.A. His emergence in the past year has been pretty remarkable and currently, he's playing the best tennis of his career.

Still, there's that little event called the U.S. Open a few weeks away and the way Fish's schedule is set up, he could end up playing a lot of matches going into New York. That's fine because he's playing some great ball right now, but how much will he have left in the tank when it's Slam-time?

Hopefully, a lot because being hot at the end would mean a lot more than racking up the titles right now.

Hey Van! Was lucky enough to have tickets for the first semi yesterday. Was even more fortunate to meet him for photo op after. He didn't even look like he broke a sweat.
I know he's scheduled himself in every single tourney this summer but I wouldn't be worried. He's happy and so nice to us fans!
We'll be seeing him in the second week. He's. Prob gonna find nole or rafa really tough to beat but he's putting himself in position to get one of the top 8 seeds. Ya, we will see him deep into 2nd week I Bet!

Thanks a lot for sharing the information...