Loving the WTA's depth. The rankings? Not so much. 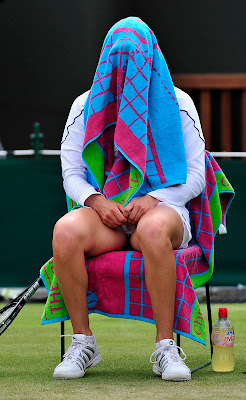 Vera Zvonareva won the the inaugural Baku Cup this weekend for her second title of the year. It wasn't a big tournament, but a win's a win at any level of the pros and it solidifies her spot in the top three.

The thing is, is "solidifies her spot" a good thing for the WTA rankings? Or should there be a massive rankings shakeup?

The level of depth has been amazing this year: Did you see Li Na getting to the finals of the Australian and winning the French? Or surprise finalists Maria Sharapova and Petra Kvitova duking it out for the Wimbledon title? You just never who's going to come through on a week-by-week basis, which is a good thing.

But wow, the rankings sure aren't keeping pace: Caroline Wozniacki's still number one, and even that "being the most consistent player results-wise" argument is running thin. Kim Clijsters is number two, but at least she did win a Slam this year. Sam Stosur is in the top 10, and what has she done lately?

Sharapova, Li, Kvitova and Francesca Schiavone should all be ranked higher than they are. And I know this is an age-old complaint, but take a look at the rankings and see if they still don't make you go, "What the ... ?"

Not to knock what any of these players are doing, but a revamped system can only strengthen what is already a great time in the game.

But no opinion on the how Van? I think the only way would be to not count all tourneys but only count say 15 a year so those who do play more don't gain rankings just because they r hearty and don't get injured. It would stop players like Wozzy from being top ranked by simple virtue of playing more than other girls.
But would it be fair?