Know what I haven't done? Given Novak Djokovic enough props. 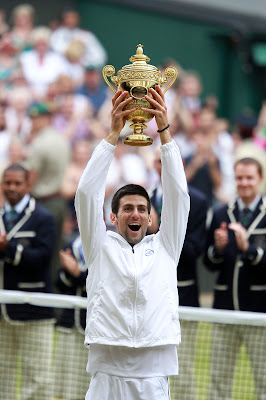 So, how about that Wimbledon? You had Petra Kvitova almost coming from nowhere to take the women's title, the Bryan brothers winning an 11th Major, Katarina Srebotnik finally winning a doubles Slam, the return of Venus and Serena Williams, unseeded players making deep runs--you name it.

And oh yeah, there was that Novak Djokovic fellow continuing his dream season by grabbing the men's crown.

I was just looking through the annals of this here blog, and I realized I haven't given Djokovic the attention he deserves. I don't know why: Maybe I feel if I write something, I'll jinx him. (I'm a superstitious fellow: You should see me with the New York Jets!

Regardless, I apologize because what he's done so far this year has been one of the most amazing tennis things I've seen in my lifetime. I apologize for the negligence on my part.

To make it up, I'm changing the name of this blog to "Novak Djokovic Talk, Anyone?" Just kidding of course, but the dude does deserve all the acclaim and coverage he's gotten so far, which will hopefully continue during his great run.