Why are we still captivated by the Federer-Nadal rivalry? 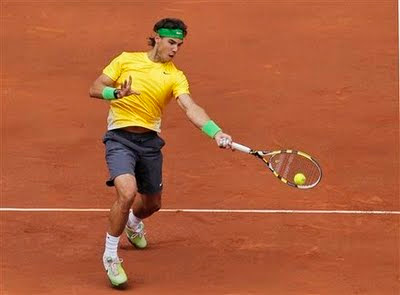 Sorry folks: I have to ask! But I promise at the end of this I'll have an answer for you!

One of the semifinals tomorrow features a dream matchup in most diehard--and even--casual tennis fans' minds: Roger Federer vs. Rafael Nadal. Those two have had some newsmaking battles in Madrid in the past with Federer notching only one of his two clay-court wins against Nadal back in the finals in '09 and Rafa turning the tables on him last year to capture the one major title on clay he had yet to win.

But it almost seems like we're a long ways away from those days when those two were head and shoulders--and whole bodies even--above the rest. One of the big changes this year has been the play of Novak Djokovic this season who's beaten both of those guys multiple times in '11. Another is that for the first time since the Paleozoic era, Federer isn't a titleholder at a Slam, suggesting some kind of downturn--however slight--in his game.

So why is it now when Rafa and Fed play, we're still all abuzz--even though in instances like this upcoming semi, there's a strong chance things could be bad for Federer?

Well (and here's that answer I promised!) I guess it simply comes down to the fact that we get to watch two of the greatest players ever to pick up a racquet go head-to-head. And not only have they treated us all to great performances over the years, they've both been incredible sportsmen and shining examples of how champions should conduct themselves. (Awww, shucks: I'm getting all weepy!)

Despite how things may go in the rivalry over the years, I know I'll still tune in, happy to see two players going at it who have done so much for the game.

Thanks for the preview post. Aside from the '08 Wimbledon Final, I've never been a huge "fan" of "Fedal". Totally appreciate and enjoy when they play, but feel like this matchup has suffered a bit from overhype, especially last year when they only met once in Madrid during the regular season. Perhaps now they are meeting up, albeit now in semis more often, the hype will die down a bit and fans can focus more on the actual match rather than any pre/post match hype.

Hey Erik, I hear you about the hype. I guess part of it is that right now it's the best show on earth as far as it goes with mainstream appeal. Looks like this Djoko-Rafa one will be something else, though!