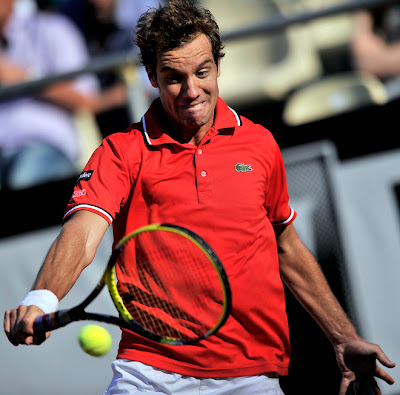 After (kind of) shaking up the tennis world with his win over Roger Federer, Richard Gasquet followed that up with a victory over Tomas Berdych today in the quarters at the Italian Open. Next up, he's playing this guy named Rafael Nadal--a tough task to say the very least.

I don't know what kind of chance the Frenchman has against the king of clay, but it's good to see him in position to battle him in the later rounds of a tournament. And who knows? Maybe he can really shake up the world this time.

Gasquet's long been heralded as one of the game's most talented players, but motivation, injuries, drug-related controversies--what have you--have held him back. Hopefully, that's all behind him and he's ready to firmly establish himself in the top 10.

When I saw he beat Federer, I thought I'd misunderstood the scroll on TV somehow and would figure it out later. But he is obviously on a roll and I'd love to see him keep it up - even at the expense of Rafa - just to add some variety to the ATP. BTW - I loved your recent article re clay court players in Tennis View magazine. Any article that tells me something about the pros AND gives me tips to improve my own game is a great article. Keep it up!

Thanks Kim! I had fun writing that story!