A little perplexed by the Caroline Wozniacki/Andy Murray losses 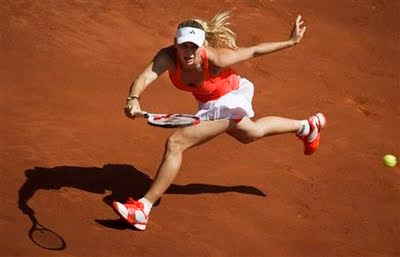 You know, sometimes a player just feels comfortable against another.

And sometimes, a player can be a little rusty and might fall to someone a bit unexpectedly--particularly when it's the opponent's best surface.

But still, Andy Murray and Caroline Wozniacki going out in Madrid to Julia Goerges and Thomaz Belluci is a little shocking to me.

Let's start with Wozniacki: You see, she's the number-one player in the world right now. Goerges is at up-and-coming status right now who is coming off a big tournament win in Stuttgart last week. A number one is supposed to win against an upstart coming off a big moment, particularly if there's a chance for revenge--Goerges upset Wozniacki in the finals at Stuttgart. I worry about Wozniacki's killer instinct so close to a Major, considering she hasn't captured one of the Big 4 before--which has been discussed ad infinitum.

As for Murray: I know clay's not his best surface, plus he is just returning from injury. But it wasn't that long ago that it looked like that post-Aussie-Open slump was wiped out with a semifinal run in Monte Carlo. Belluci's a decent player, for sure, and is a threat to most of the top seeds. I think Murray missed a bit of an opportunity at a deep run here, which could've helped his confidence going into the French but more importantly, after then.

So I have questions about the state of the games for two of the best active players yet to win a Slam. These mini-Madrid runs only enhanced those queries.