If you play on the clay, the results can come 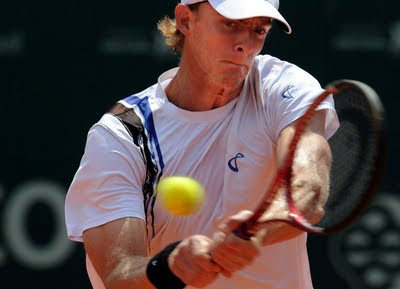 This may sound like a bit of an odd statement, but I'm really in "admire mode" right now when it comes to Kevin Anderson and Milos Raonic.

Those two are near mirror images of each other game-wise: big-hitting, big-serving dudes who are at their best on faster surfaces, as seen by both capturing their first career titles earlier in the year.

But for the past few weeks, Anderson and Raonic have been grinding away on the red clay and now they're in the quarterfinals at the ATP stop in Estoril. Sure, it's only the quarters right now, but that's a very decent result for two guys who no one would ever think of as being a contender on the dirt. Getting out there and fighting and figuring out how to play on a surface least-conducive to their strengths will only help them in the long run.

So, so, so many players should follow that example: Instead of dodging the challenges of European or South American clay-court events, get out there and embrace it. Who knows what could happen? Sharper ground strokes and better conditioning, more money—what's wrong with that?