Can you bet against Christina McHale and Melanie Oudin? 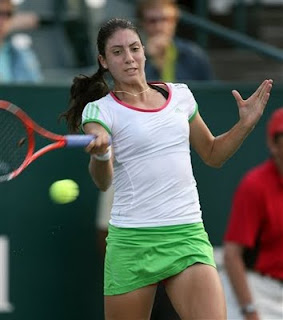 Strange and stranger things have happened in Fed Cup over the past couple of years for the U.S. team. Back-to-back finals with nary a Williams sister involved have proven the team is always dangerous.

The squad fell in the first round and is competing in a playoff tie against Germany this weekend. The German team is led by Andrea Petkovic and Julia Goerges, who will be taking on teenagers Melanie Oudin and Christina McHale. The Germans are heavily favored as they're playing at home on a surface--red clay--on which they have much more experience. But Oudin has proven she's up to meet any challenge when it comes to representing her country, and McHale is at a career-high ranking ...

And enough of all that U.S. cheerleading by me! Sorry about that.

Honestly, though, I have to say what the U.S. Fed Cup team has pulled off recently has been one of the best stories in sports to me. As much as I've always loved Davis Cup, I've been just as apathetic about what went on in Fed Cup, until Mary Joe Fernandez came on board and started winning ties scrapping together teams. If this were football, you wouldn't hear the end of the coverage. It truly deserves more. But it doesn't, so I have to chime in--and up--when I can.

That all being said, I think it's going to be rough for the U.S. team this go-round, but when isn't it? However, I wouldn't bet against McHale, Oudin, Liezel Huber and Vania King continuing a really great story.