Mardy Fish on the verge 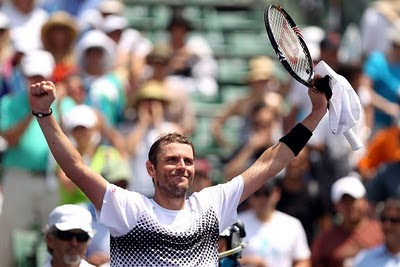 How about that Mardy Fish? It looks like he's getting on one of those Mardy-Masters-series runs where next thing you know he's in the finals. Of course, to pull that off here would be a monumental task considering who he even has to face in the next round, David Ferrer. But beating Richard Gasquet and the lava-hot Juan Martin del Potro back-to-back shows Fish is in great form.

Plus, he's on the verge of accomplishing something that I never thought could happen for him. If he beats Ferrer, he becomes the top-ranked American. Sure, that's not the same as pulling that off during the McEnroe-Connors or Sampras-Agassi eras, but it's still an impressive feat, nonetheless.

By now, we all know the story: Fish lost 30 pounds and went on a tear through the rankings, which has left him on the doorstep of a major personal feat. It would be well-deserved if he made it to that top U.S. spot, and great if he can take it even further.