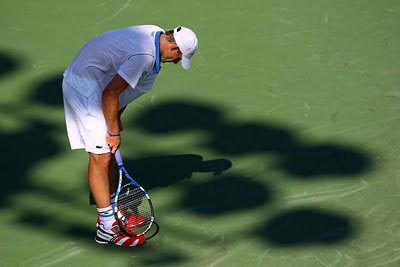 I guess if you were a top 10 player competing in Miami and your first name was Andy, it just wasn't meant to be for you with Andy Roddick falling to Pablo Cuevas yesterday. That follows on the heels of Andy Murray losing to Alex Bogomolov Jr. in straights the day before.

Roddick had a legit claim as to what contributed to his downfall, him being sick and all. As for Murray, who knows what's going on? But you know what? I'm actually going to give him a valid excuse for losing to Bogie in Miami and Donald Young last week, aside from just generally being in a slump and coming off an injury.

You see, Bogomolov and Young were the worst-type players for Murray to compete against first up: They're both hungry guys who fought their way through qualifying just to enter the main draw. Then neither one of those guys had particularly easy first-rounders to get through just to face Murray. So by the time Andy stepped on the court, he was facing a couple of guys, who while may not be able to match him talent-wise, were clearly battle-tested. That's the toughest player for anyone to go against, especially if you're already in a slump.

Andys Murray and Roddick are obviously too talented to think this is only the beginning of a downward spiral. But adjustments do need to be made, like Roddick figuring out what's up with his health and Murray perhaps trying to get up for those early-rounders like they're the later stage of a tournament.

Well, I'm sure at least now, Murray will be wary of any qualifiers in his section of a draw!

Murray is already in a downward spiral....