Juan Martin del Potro: The return of the big dog 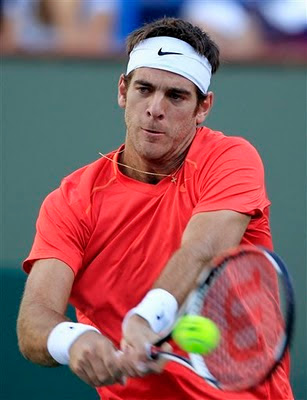 You know who's won a lot of matches recently? You know who could shake up the ATP pecking order by the time 2011 is all said and done?

I'm gonna stop right there because with the headline and the picture it's pretty obvious who I'm talking about!

Anyway, Juan Martin del Potro's recent tear continued with his easy win over Radek Stepanek in the first round of the BNP Paribas Open. It's great to see him back and showing him some good stuff rather than what I thought was that too-soon-comeback he tried at the end of last year. He faces the defending champ Ivan Ljubicic next, which will be a tough one for both players. You have to like Delpo's chances, especially as how Ljubicic really hadn't been playing like the guy who shook up Indian Wells last year. But you never know: That's why they play the game!

Regardless, del Potro rising up the rankings is exciting, and provided how his body holds up, it'll be interesting to see where he lands.