How will Roger Federer fare in Miami? 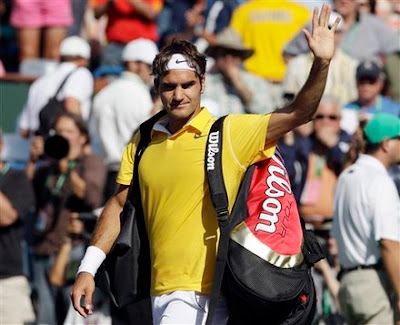 The unofficial "fifth Slam" has kicked off, the Sony Ericsson Open, or the Miami Masters, or Key Biscayne for you fellow old-timers!

Anyway, the men's game has been essentially taken over right now by Novak Djokovic, whose unbeaten run to start 2011 has just gone through Indian Wells. However, there's another guy I'm wondering about heading to Miami who knows a thing or two or 12 about unbeaten streaks: Roger Federer.

You really can't argue about the start he's had to the year: The only guy that's beaten him is Djokovic. However, he's now fallen to Djoko four times in a row, including twice at Grand Slams. In Miami, they're on opposite sides of the draw for the first time in a while at such a big event and can only meet in the finals.

And, you know, I actually like Federer's chances to get there. Since he brought Paul Annacone on board last year, he seems to have gotten rid of that case of early-round yips he was experiencing this time a year ago. The biggest threat he faces on his side of the draw is Rafael Nadal, and I still will pick him over the world number one on a fast surface 95 percent of the time.

Last week, in the Serves and Returns feature I write for GoToTennis, I asked "Does Federer need to win Indian Wells?" mainly for his confidence and to keep pace with Nadal and Djokovic. He had a great run there, before running into a player at the height of his powers. I don't feel the same sense of urgency here, partly because of how the draw shook out, along with the fact that he's Roger Federer!

So, how will Federer fare in Miami? I think A-OK.

I share your view in that Fed will fare ok. I actually thought all of Fed, Nole and Rafa were performing as well as they needed to last week up until the semis when

c) EVEN Nole I maintain wasn't at the level we've seen during his 20 match winning streak through 2011.

Bottom line is the IW/Miami 4 yr spell of poor performance appears to have been broken. And like you I'd back Fed over Rafa on a fast hard court.

That doesn't mean he'll win the WHOLE THING. But I doubt we'll see him flame out early either.