A heartbreaker or 'take heart' for Ana Ivanovic? 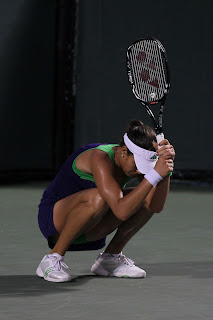 Man, that was some comeback by Kim Clijsters.

Or was it a matter of being let off the hook by Ana Ivanovic?

Regardless, the outcome's still the same: Clijsters won, Ivanovic loss. My only hope is that Ivanovic doesn't lose more than just that match, namely momentum. She's done a lot to put those recent "bad days" behind her and looks to be making her way back to top 10 territory. A loss like this one, though, can be kind of crushing, especially when you start thinking about how the draw had opened up.

I did like what I read in one of the post-match stories, how Ivanovic said she had a little bit of a cry and some racquet-smashing then was OK. I hope that's the case.