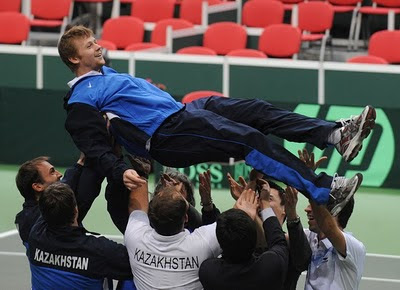 Davis Cup and TTA? are longtime pals, which I'm sure you know by now.

But let me give you a few reasons why I think DC is great, just based on this past weekend alone:

• It rewards the little guys: The World Group kicked off with a lot of countries featuring no top tenners. That can work out OK in Davis Cup: Look at Kazakhstan's win over the Tomas Berdych-led Czech Republic, in Ostrava no less!

• The road can be friendly sometimes: Aside from Andrey Golubev and Kazakhstan's shocking victory, how about the U.S. getting it done in Chile on clay? Granted, this isn't a Chilean team that used to feature two top-10 players, but a win on your least favorite surface away from home is always good.

• What's better viewing than a live fifth rubber?: Probably one of the most tense situations in pro tennis is the live rubber to determine a tie. Philipp Petzschner came through against Ivo Karlovic to seal Germany's win over Croatia—another road win for a team.

• The stars come out: You're not always going to see all of the big guys out there, but Rafael Nadal, Andy Roddick and Robin Soderling are nothing to sneeze at!

• Smells like team spirit: It's great to see guys that are fighting for the same thing on a week-to-week basis put that aside for national pride and glory.

(That message was NOT brought to you by Davis Cup: It's a pure Tennis Talk, Anyone? sentiment!)