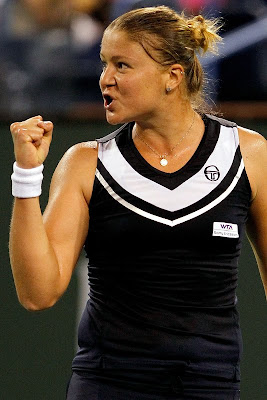 Way back in January 2011 (at least that seems like a long time ago!), there were a couple of scorelines at the Australian Open that brought two words to mind:

One was Marin Cilic blasting Donald Young off the court, 6-3, 6-2, 6-1. I was a little disappointed in that effort because I thought with the way Young had blasted through qualifying, he would've at least been competitive with Cilic. The other was the double bagel heard around the world: Kim Clijsters' demolition of former world number-one Dinara Safina. Now, Safina had been in a looong slump heading into that match, but it was still hard to see that one coming.

The months since hadn't exactly been kind: that is, until they hit Indian Wells this week. Young fought through the qualies, knocked off veteran Potito Starace in the first round before making the biggest noise of the tournament with his win over 5 seed Andy Murray. His run ended against Tommy Robredo yesterday, which shouldn't be knocked: Robredo knows how to win those matches against unheralded players coming off career victories. Hopefully, Young takes this tournament and builds from it.

Safina's run at the BNP Paribas Open hasn't been too shabby, either: She's in the fourth round after beating Daniela Hantuchova and top-tenner Sam Stosur in back-to-back rounds. She faces Maria Sharapova next, and if her head is truly back in the game, she could give her countrywoman a real run for her money. Safina back in the mix would be great for tennis fans and the game as well.

I hope the results for Young and Safina in Indian Wells are more the norm going forward rather than what happened in Australia.