No quarter given to the top seeds in Doha 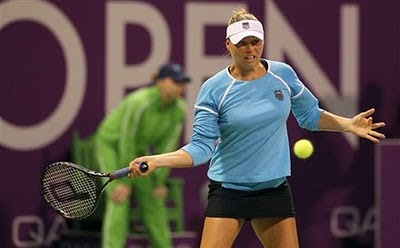 The quarterfinals are set at the WTA stop in Doha this week and only three seeds made it that far: Caroline Wozniacki and Vera Zvonareva--the top two--and Jelena Jankovic.

The other players left aren't too shabby with Daniela Hantuchova and Marion Bartoli among them. Anyway, though, since I'm here, I figured I'd do a little quarterfinal prediction/description-type thing and give you my picks on who'll get to the semis:

Wozniacki vs. Flavia Pennetta
If this was still the first few weeks of the season, I would have actually picked Pennetta. But it looks like Wozniacki's back in form, so I'm gonna go with her. (And yes, I know she's the number-one player in the world and she's supposed to win!)

Shuai Peng vs. Bartoli
A decent run by Peng here, particularly that win over Francesca Schiavone, but I think Bartoli wins this one. She really dropped the hammer down on Shahar Peer and might be ready for one of those Bartoli streaks, where she rips through a draw when you least expect it.

Jankovic vs. Klara Zakapalova
You never know who Jankovic is going to lose to these days, which is a sad state of affairs, considering she was number one in the world a couple of years ago. I think she wins this one, though.

Zvonareva vs. Hantuchova
I know it's been going on for a while now, but I'm still kind of shocked by the run Zvonareva has been on over the past few years. Even though Hantuchova's playing great, coming off her first tournament win in years, I'm picking Vera Z. I've been burned enough by not going with her!