Milos Raonic is the real deal 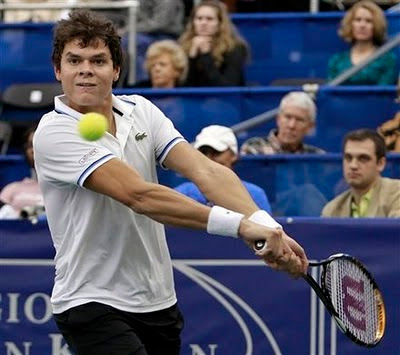 It's kind of funny to think that the hottest player on the planet right now, Milos Raonic, has had losses to the likes of Simon Greul and Edouard Roger-Vasselin. But I guess beating guys like Mikhail Youzhny, Fernando Verdasco, Radek Stepanek and today, Mardy Fish in Memphis, can make up for that!

The kid has played a lot of matches so far this season, counting qualifying results, but it looks like he's done with getting into tournaments that route--barring anything unforeseen. Truth be told, I thought that Australian Open run was a fluke, but I guess that shows what I know! But here he is, in his second straight final after winning San Jose last week. I'm intrigued to see what he does against one of the big bombers, Andy Roddick, who despite not being as threatening as one of the game's big four is a whole different animal from the guys Raonic has beaten this year. It'll be interesting to watch.

And I'd like to give a shout out to our neighbors to the North and the great run by two of its young guns, Raonic and Rebecca Marino, who is in the finals in Memphis as well!

I guess we will see how Marino's and Raonic's stories play out. Everyone was excited about Wozniack winning a WTA tournament a few years back-after a long drought for Canadians. But Marino and Raonic have weapons that I never saw on A.Wozniack. The serves. I think movement needs to come next though. It would be great for tennis Canada to have a couple people in the limelight-kind of like Serbia. It could get programs going better if Canada produced their own heros.